The Witcher Books and Their Place in Poland’s Culture 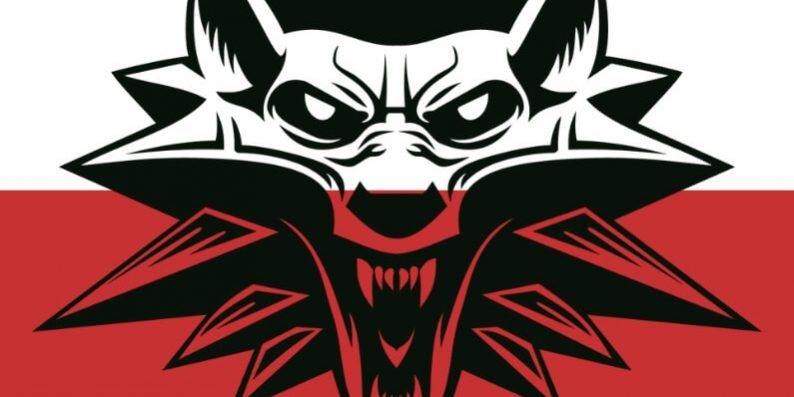 After the roaring success of “The Witcher 3 – The Wild Hunt”, and the Wticher series on Netflix, more fantasy fans have been swept up into the dark escapades of Geralt of Rivia.

But it’s the series of the Witcher publications written by Polish author Andrzej Sapkowski that the incredibly successful video games come from.

But if you’re a fan of the video game series, is it worth reading the books?

Similarly, if you’ve read the books, does the game stay true to the book series?

Well, that’s exactly what you’re going to see in this article.

The first book, or collection, was published in 2007. In 2008 he published the next book, Blood of Elves. However, in 2015, he turned back and wrote Sword of Destiny, that in the overall timeline, takes place between The Last Wish and Blood of Elves. 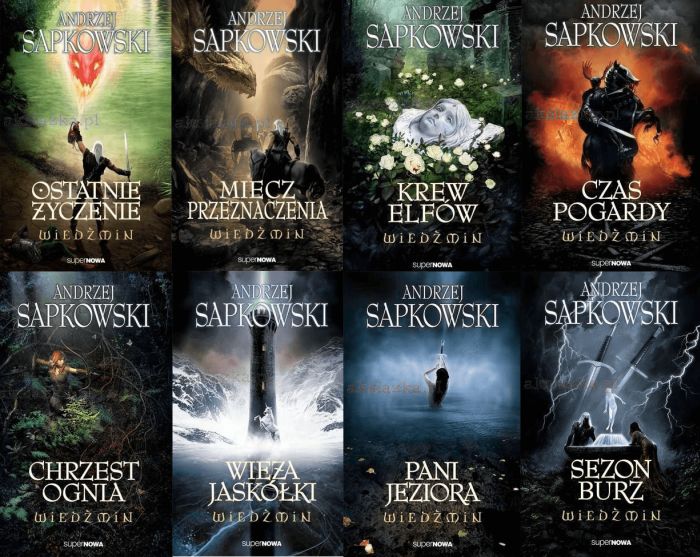 This means that the Witcher novels order can start in two places:

Here are the orders of the Witcher novels in both chronological order and publication order:

When talking about the publication order of the books, a collection of short stories by the name ‘Wiedźmin’ was published in 1990. It featured the first four stories in the Witcher universe. 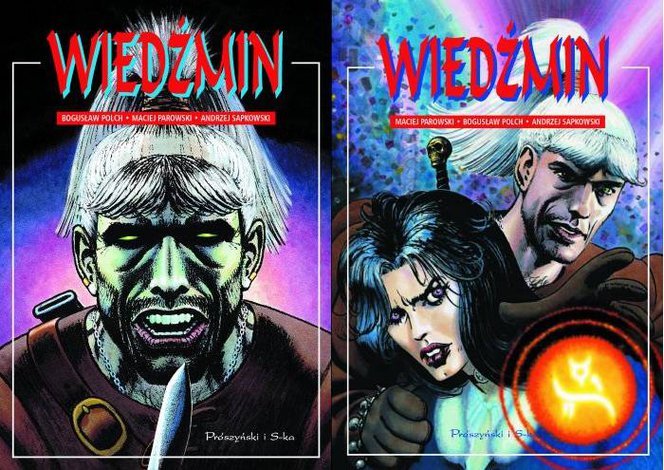 Even though the books have been published out of chronological order, the entire series is based in a world that was settled by elves many years ago. If you wanted to start from the absolute beginning, these short stories (published in Polish) would be the ideal place to start.

When looking at books, games, comics, and every kind of media in The Witcher universe, it’s sometimes difficult to put together the entire timeline. Figuring out what happens when is important to make sense of all the complex and detail relationships.

To the best of my ability, here’s a quick overview of the main events in the Witcher Universe:

Where to start with the Witcher novels

The best place to start with the Witcher publications depends on how much of the Witcher universe you’ve experienced.

If you’ve never read a Witcher book or comic or played a game before, the best place to start with the Witcher texts is with Blood of Elves.

This is the first full witcher saga that can be read cover to cover. It’s an immersive saga that gives you a good feel for Geralt and his world, without overpowering the reader with too much lore and mystery.

If you have played a game (or games), it might be a good idea to start with a book that comes before, after, or between the games.

If you’re reading this, you’ve probably played The Witcher 3. If you’d like to read a Witcher book that’s based on a similar era, start with The Lady of the Lake. This book is placed only 4 years before The Witcher 3: Wild Hunt and only 2 years before the first Witcher game.

I’ve played the games – should I read the books?

The short answer to this question is yes. Yes, you should read the books if you’ve enjoyed the games.

The Witcher world started as a collection of books. It then evolved into more books, and a series of video games for a reason – because the books are that darn good.

The video game lets you explore the world of Geralt and al his adventures. And even though the game is written and developed incredibly well, consuming a story via video game as opposed to a book is entirely different.

There are a few differences between the Witcher games and the books – you’ll see more about that in the next section.

Differences between the game and the books

There are some noticeable differences between what Sapkowski wrote in his books compared to the game.

First of all, the books were written in Polish and then translated into dozens of languages. In doing so, many jokes were lost. This is evident when you read the books, as Geralt’s humour doesn’t always make sense.

That’s because there’s quite a lot lost in the translation from Polish to English. Plus, the book has more space and time to develop a character more. 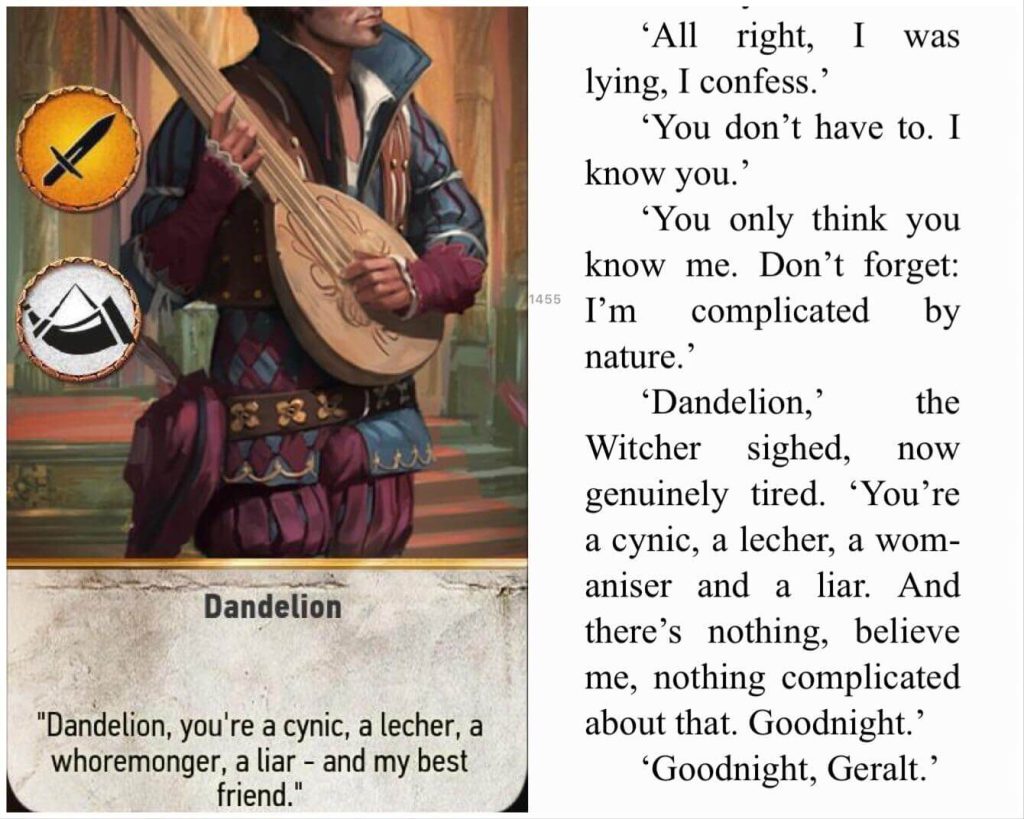 In the above Gwent card, this quote from Geralt may be seen as a compliment toward Dandelion. However, in the passage on the right that it’s taken from, it’s quite clear that the quote didn’t exactly come off as friendly.

Moving on from what’s been lost in translation, there are a few differences between what Sapkowski wrote and the universe the CD Projekt Red created.

In the novels, it’s portrayed that Geralt doesn’t like all the killing that’s involved with being a Witcher. He enjoys the work and the role of being a protector, but at times often feels that he ‘kills too much, too frequently’.

In the game, Gerald is a sword-for-hire, a general lacky that goes around collecting debts and beating up petty thugs. Given some of the options that a player can say to the people Geralt interacts with inside the game, one can turn Geralt from a noble warrior into nothing more than a criminal himself. This is reflected in the attitudes of a lot of Novigrad residents.

It’s worth noting that the storytelling power of a novel and an immersive open-world game are very different mechanisms. While the game does vary a lot from the novels themselves, the game universe is more often than not a great reflection of the world created by Sapkowski.

Polish imagery and culture within the Witcher universe

There’s a lot of reference to Slavic and Polish mythology in the Witcher world.
Consider for a moment Mirow Castle near Krakow: 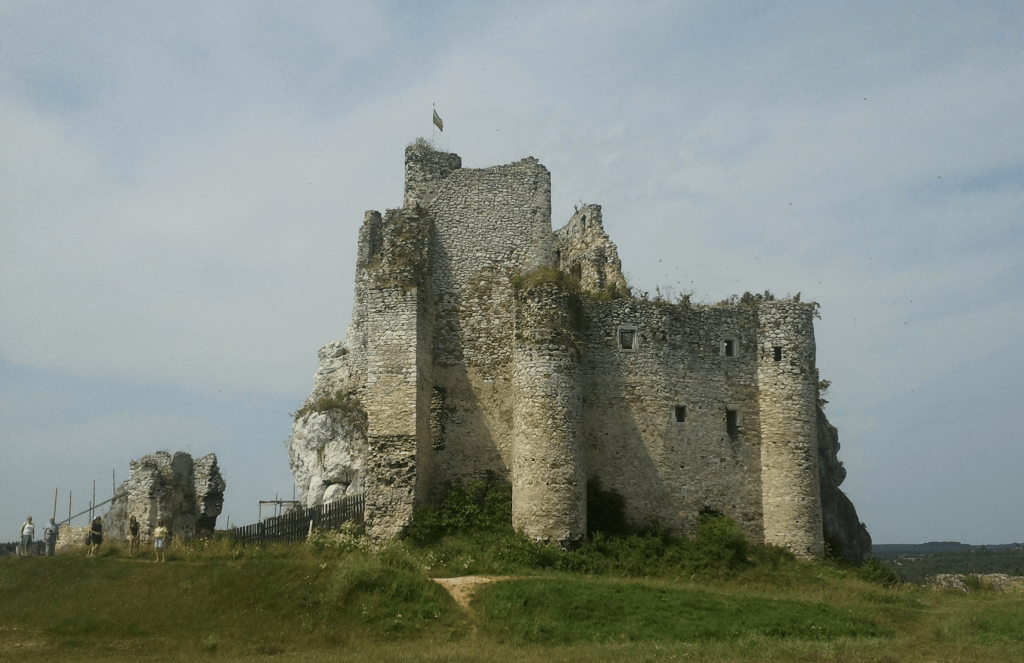 and Lornruk Castle from the game: 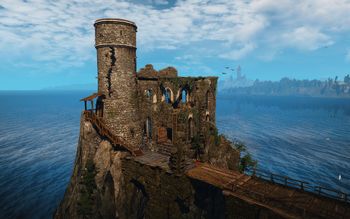 The developers of the Witcher games were Polish. It was stated that they did use Poland as an influence on how the game looked visually.
In what would have to be my favourite example of this, is the dock tower in Novigrad: 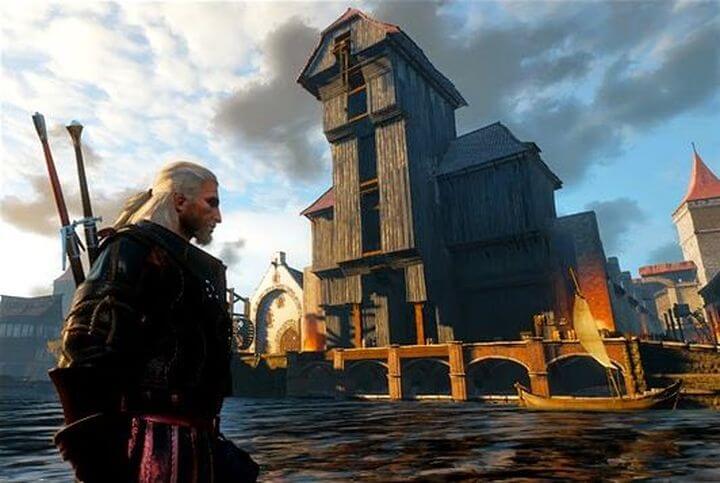 Image source
And the dock tower of Gdansk: 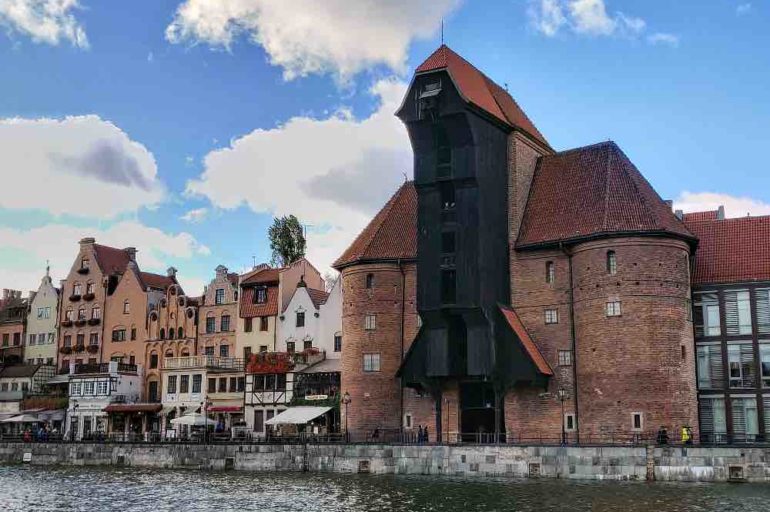 Come to think of it, the official name for Novigrad is ‘The free city of Novigrad‘, not unlike ‘The free city of Danzig‘!
This may be clutching at straws here, but it’s interesting nonetheless – take a look at the following map of the area of Redania from the Witcher universe.
Rotate it 90 degrees, then compare it to modern-day central Europe: 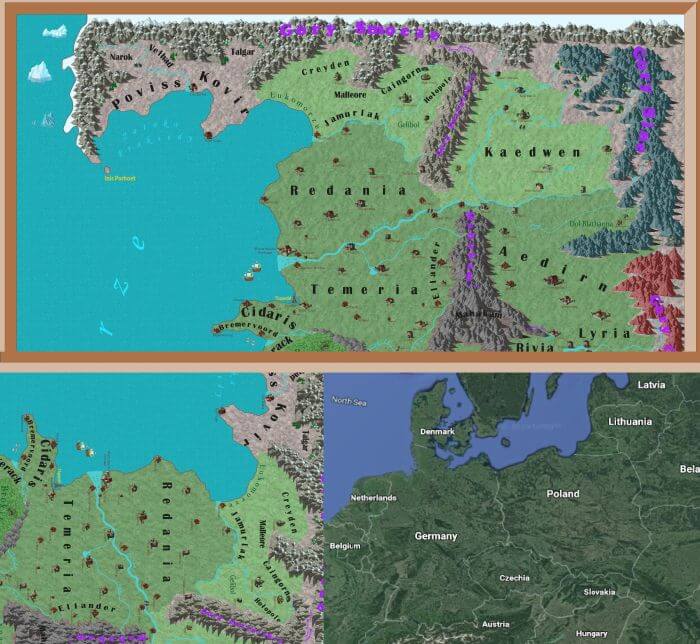 But geography and landscape aside, there’s a lot of other examples of ‘Poland’ in The Witcher world.
I mean, take a look at the way Tomira the herbalist decorates her house: 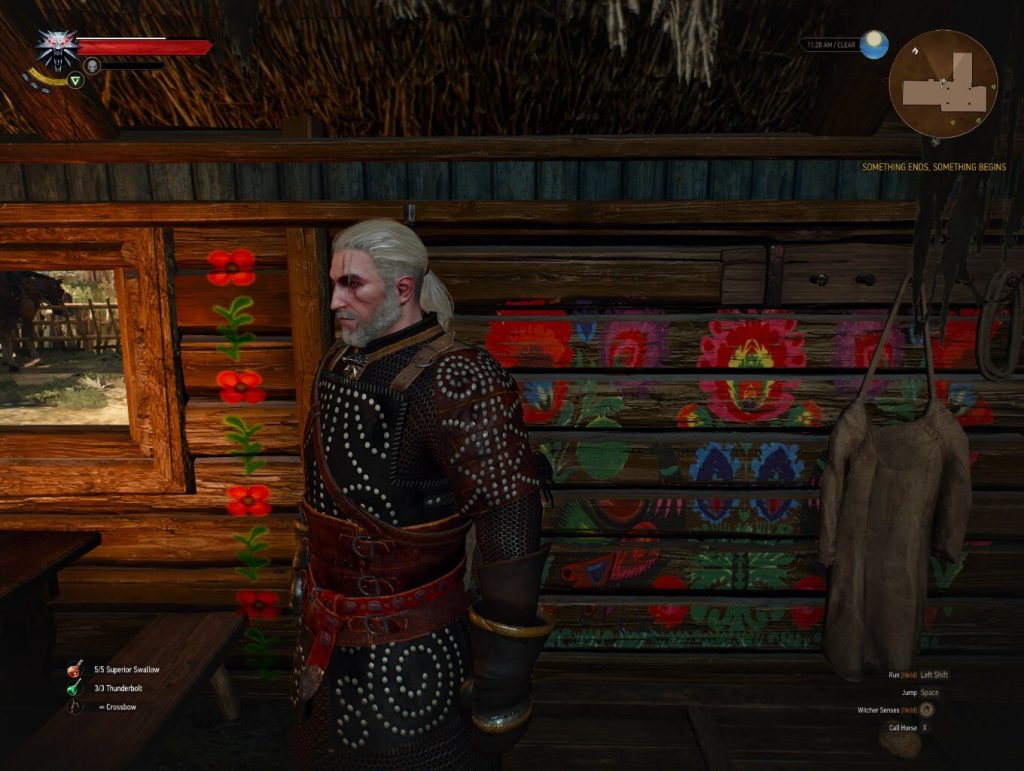 The Gwent card of the Redanian foot soldiers holds shields with images, not unlike the Polish Eagle and Polish Flag 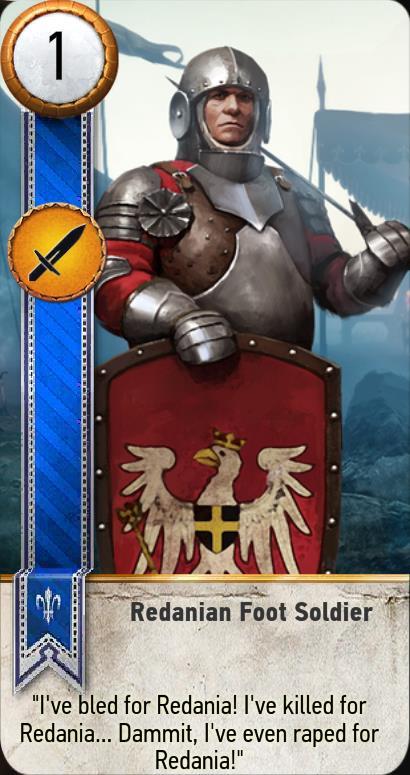 But many stories and quests echo Polish Romanticism, too.
In one quest in the Witcher video games, Geralt must convince ‘Lady Midday‘, a young woman who cannot accept her death, that she is dead. 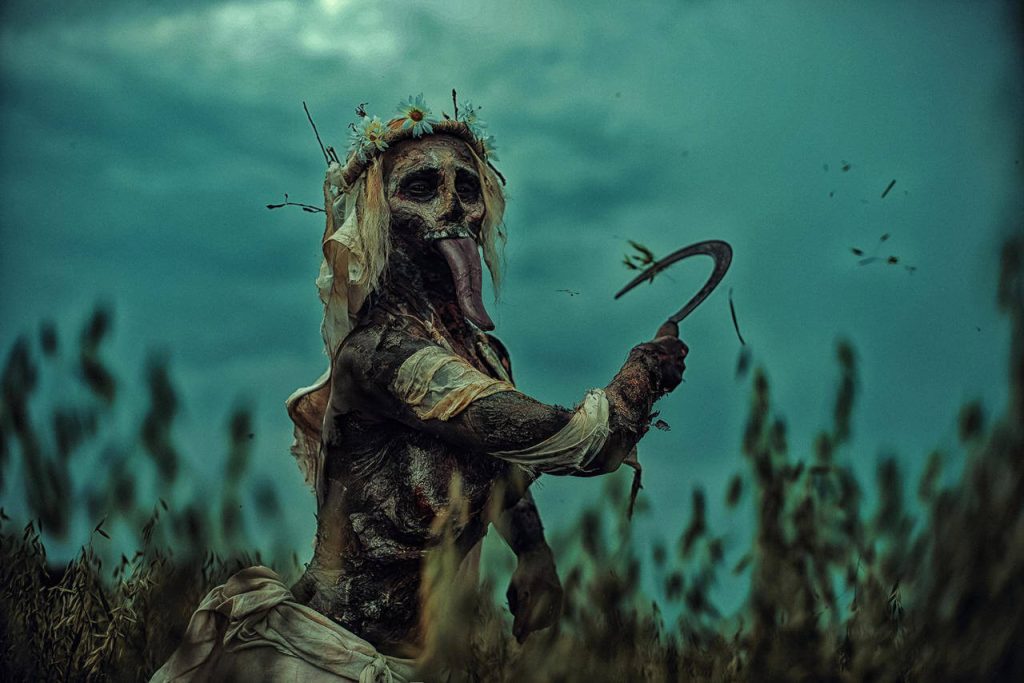 Image Source: Deviant art
Geralt’s isn’t too sure of his own negotiating skills, and therefore enlists the help of his poet friend Dandelion.
What happens next is an incredible moment for anyone familiar with Polish poetry. Dandelion recites ‘The Ghost’, a poem by arguably one of the most creative Polish minds, Adam Mickiewicz.
To a Pole, the inclusion of The Ghost adds romance and makes The Witcher a lot more ‘special’.
To anyone else, it’s confusing why a simple poem manages to have such a profound effect on such a vicious ghoul.
This again is a problem that stems from creating an international game from a book that’s based heavily on a culture that’s not globally well known.
The story of ‘The Midday Lady’ is just one of many quests that lean heavily on Polish folklore.
Poland herself knows that it’s culture is reflected in the Witcher universe and takes it in her stride. 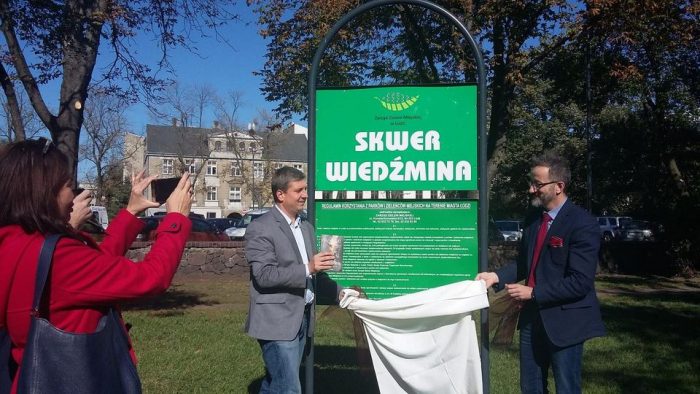 Łódz, the hometown of the Witcher’s author Andrzej Sapkowski recently unveiled Skwer Wiedżmina or ‘Witcher park’. Over the coming months, a playground will be built around the science fiction and fantasy world of The Witcher.
And if a picture of the Major unveiling the park wasn’t enough, Google has made it official:

The Witcher plays a huge part in the world of Polish culture. The fascinating dark fantasy adventure based on the world of monster hunters is a cultural favourite for Poles.

The books show off the imagination of a fantasy world set in Slavic Europe, and echo parts of Polish and Slavic lore, history and culture.

What is your favourite Witch books?