The Polish Flag – More Than Just Red And White Stripes 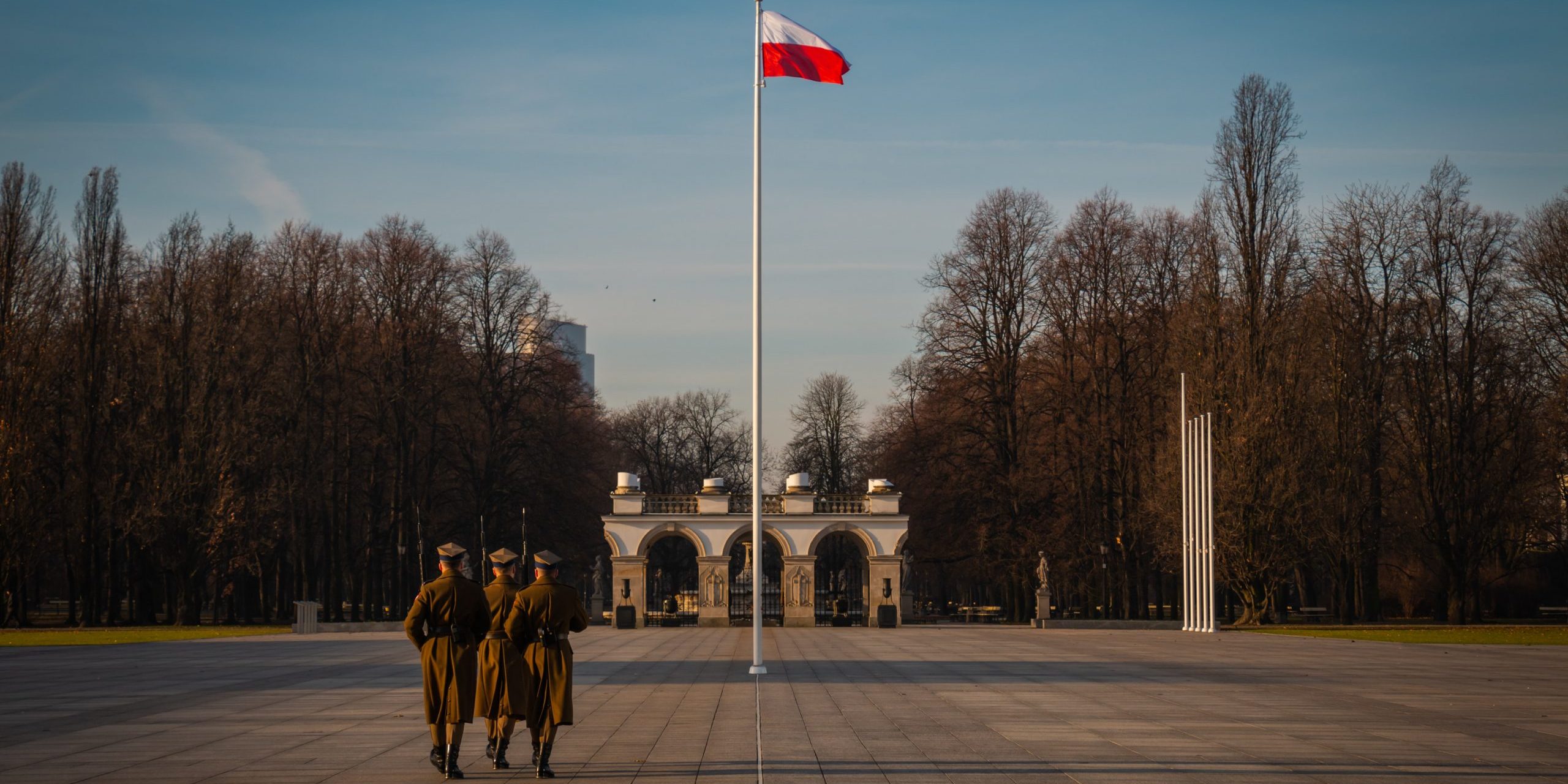 The Polish flag is two equal horizontal stripes, the upper one white and the lower in red. The colours are defined in the Polish constitution as the national colours. The Polish national coat of arms is placed in the centre of the white stripe for official use abroad and while at sea.

The national flag of Poland is simple in design but still strikes a certain level of pride for many Polish citizens all over the world. Poland has a national holiday for the flag – Flag Day, May 2nd, is a holiday set aside to celebrate the raising of the red and white flag in Berlin after the battle of Berlin.

If you’ve ever wanted to know a little more about the plain white and red, or biały czerwony, you’re in the right place.

In this article, you’ll see:

It’s worth noting that it’s hard to talk about Poland’s flag without referencing the red and white of Poland. So to learn its origins, you first need to know a little about the origin of red and white in Poland.

The legend states that the first settlers of Poland saw a white eagle landing in front of a red sunset and use that as a sign that they should settle there (in what is present-day Gniezno).

Combine the legend of the Polish Eagle with the christening of Poland, and we get the origin of the colours of Poland’s national flag.

But what about the flag itself?

After Poland’s baptism, the church required a lot of Pagan symbols to be replaced with Christian ones. Many countries back then didn’t have ‘flag’s as we know them today, but rather banners and insignia.

Poland’s first royal banner dates back to King Boleslaus the Generous (who reigned for a whole three years from 1076 to 1079).

But King Vladislaus the Elbow-High (who ruled from 1320 to 1333) used red cloth and placed a white eagle on it.

This banner was used at royal ceremonies and taken into battle. So important is the bird, that it’s mentioned in The Witcher Books and video games.

Many national flags have rules around how they can be used, and Poland is no different. 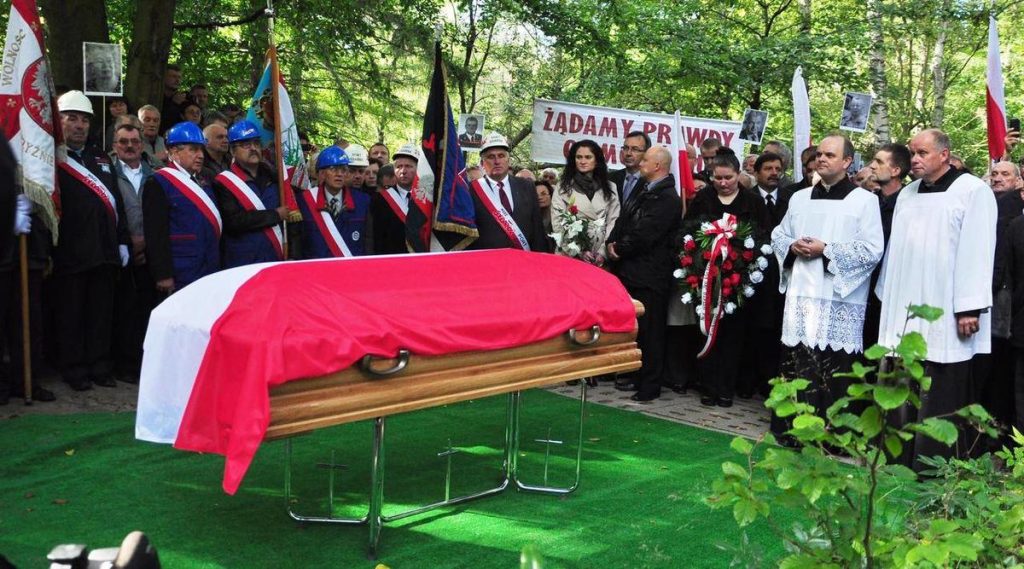 To find the first official usage of red and white representing Poland, we need to go back over 1000 years to 966 – the baptism of Poland. It was here when Mieszko I converted to Christianity, leaving behind paganism. 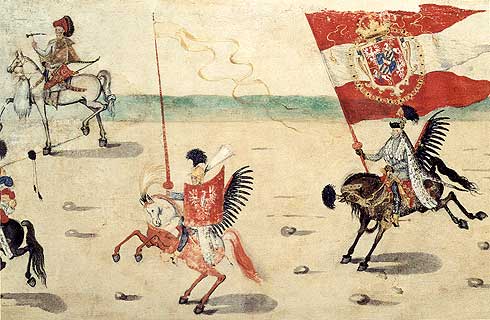 Throughout the 1800s and 1900s, European militaries used cockades, knots of coloured ribbons pinned to the hat to show the nationality of their military. Throughout the battles of this period, Polish cockades were red and white.

When the military commission announced that soldiers must wear a metal cross representing Christ into battle, heroes like General Kościusko and Poniatowski continued to pin their red and white cockades to their hats.

Below, you can see Kościusko riding into battle and the cockade on his hat. 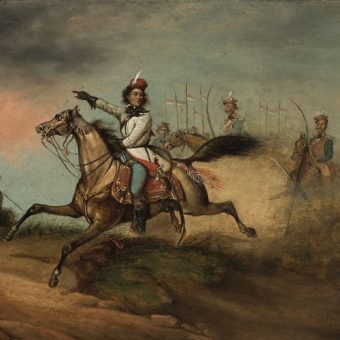 As red and white began to be used more and more in military and government situations, civilians started to use the colours to celebrate. The first recorded usage of red and white by civilians was on May 3, 1792, in Warsaw, where the population celebrated the first anniversary of the Polish constitution.

Between 1807 and 1830, Poland was a ‘puppet state’ of both France and then Russia. During the November uprising against Russian rule in 1830, it was decided that its military needed a unique national insignia. Red and white cockades were then again worn as the Polish military fought for its independence from Russia, Prussia and Austria.

One of Poland’s first public celebrations since regaining independence was on May 3, 1916, in Warsaw.

So new was this to its citizens that government officials had to go into the crowd and tell Poles which way to hold their flag.

To prevent the Polish Navy from the incorrectly using it, a Polish Eagle was placed in the middle of the white stripe to show which way is up clearly.

Since the start of the twentieth century, there has been minimal changes. The only change being some slight alterations to the definition of the colour red – but more on that later.

The colours even come in alcoholic form! Below, you can see a shot made from Polish Vodka and raspberry juice! 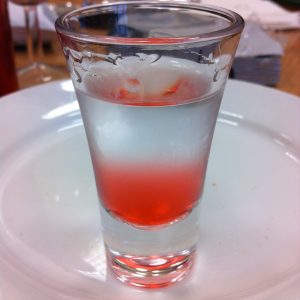 During the Nazi invasion of Poland in 1939, the Polish Army, Navy and Airforce used little to no red or white on their uniforms, as you can see below. 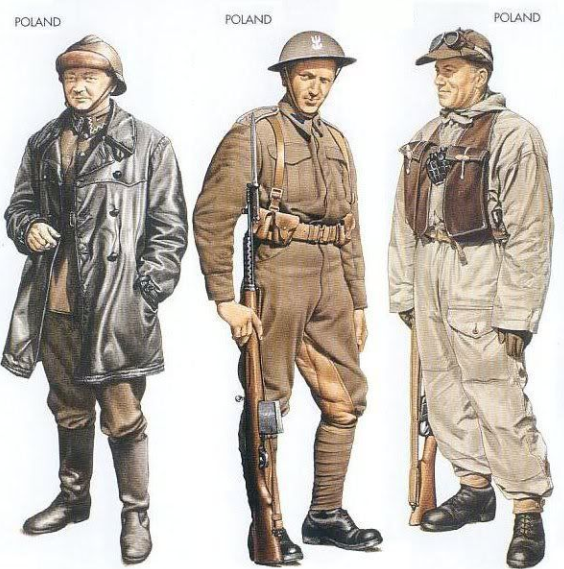 Throughout Europe and North Africa, soldiers raised the flag over many battlefields after an allied victory where Poles played a significant role. 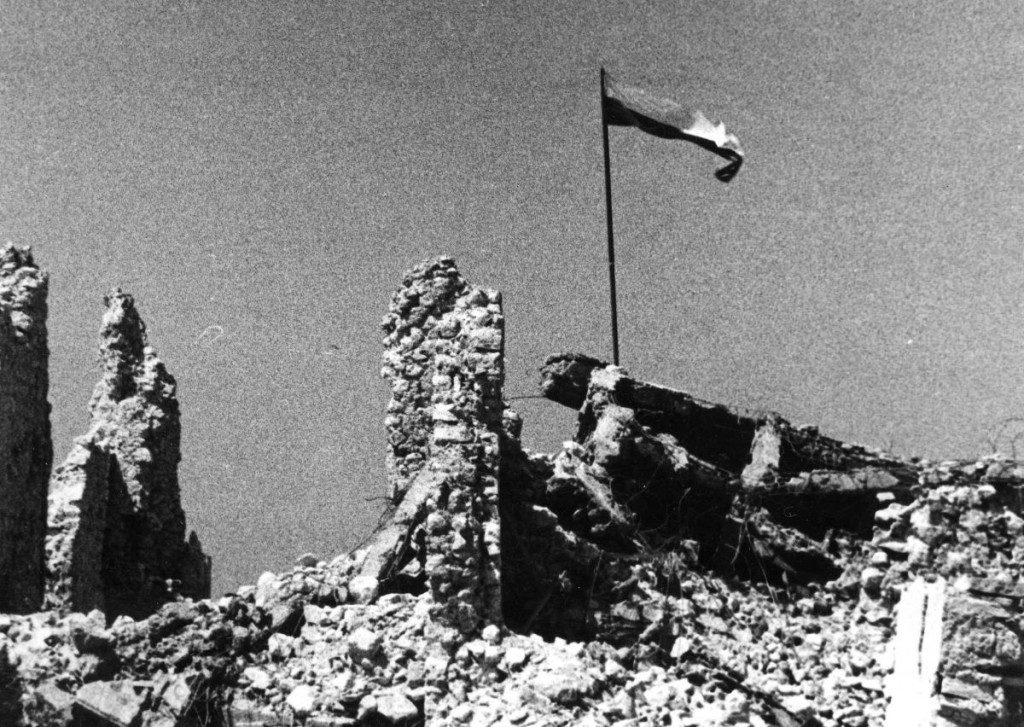 Another well-known example of Poland’s flag being used in victory is in Berlin. On May 2, 1945, after the Battle of Berlin, Poles of three separate battalions raised the red and white on the Berlin Victory Column to signal that the capital of the Third Reich was in allied control. 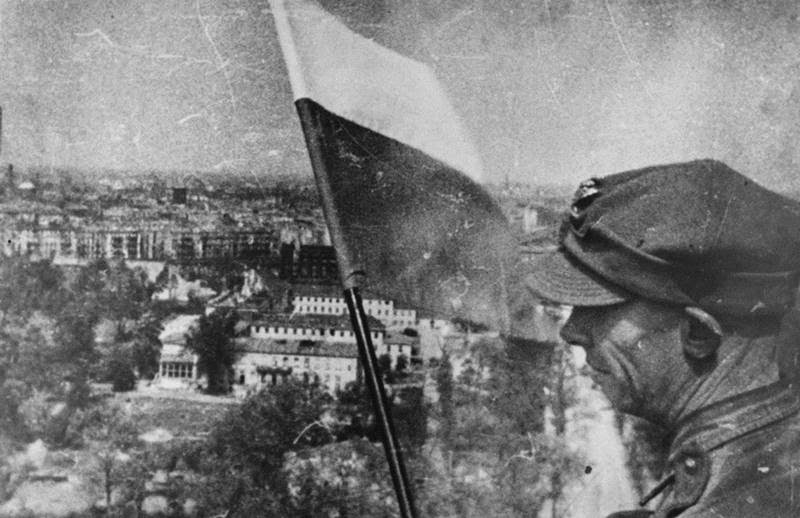 The Warsaw Uprising, The Home Army & The Flag

The red and white stripes took on a new meaning, especially for those in Warsaw during World War 2. 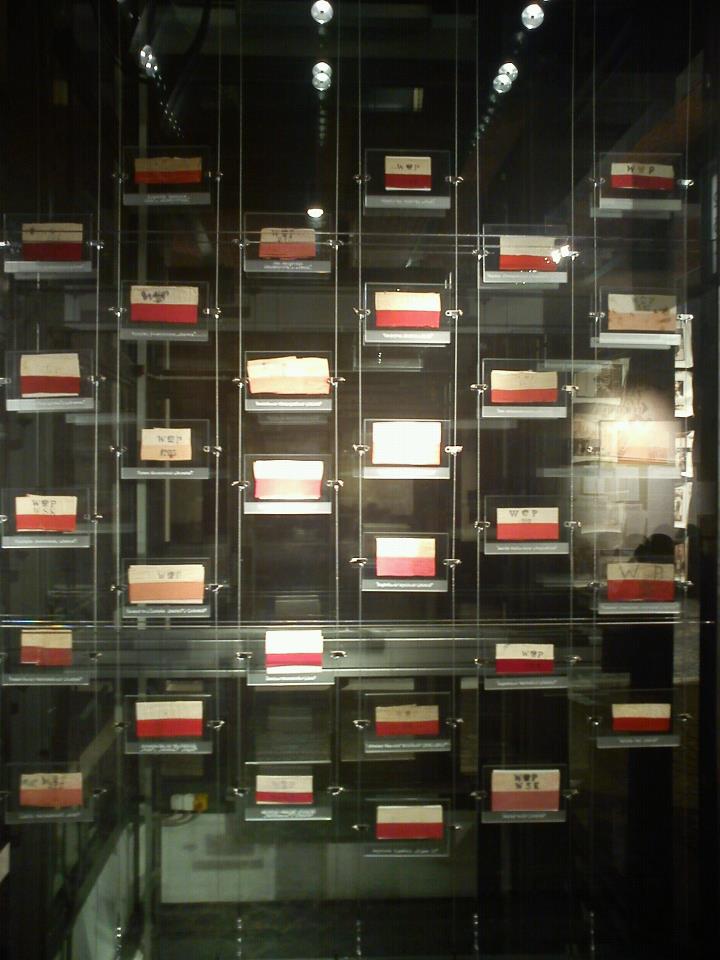 During the Warsaw Uprising, the infamous 63-day battle where the home army fought off Nazi occupiers, those fighting for Warsaw’s liberation wore red and white armbands to distinguish themselves. These armbands were worn by civilian Polish women and men, as well as doctors and nurses.

Similar armbands were also worn by Polish Freedom fighters in the south of Poland between 1918 and 1921.

During the Warsaw Uprising, equipment was in short supply, so it wasn’t unusual to see a Pole wearing the familiar shape of a Nazi helmet, however with its own red and white stripes, and sometimes with a white eagle. 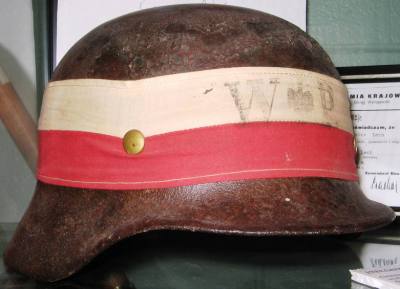 The Polish national flag would be raised over the ruins of the Central Station of Warsaw (Dworzec Centralny) after the liberation of Warsaw by the Home Army and Soviet Forces on January 17th, 1945.

When Poland was behind the Iron Curtain, its symbols and emblems all remained unchanged. This is quite unusual, as many other communist countries had their flags modified to include a red star or a hammer and sickle.

For example, this is the Albian flag during the years of communist rule: 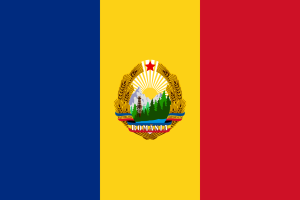 It’s not clear why Poland didn’t have her flag modified to include some form of socialist imagery, but officials changed the Polish Coat Of Arms. In one of the most humiliating acts in the county’s history, the Polish Eagle had its crown removed from it’s head.

The flag also played a crucial part in the Solidarity movement. During the 1956 riots in Poznan, protesters waved red and white flags that were covered in blood on the red stripe. 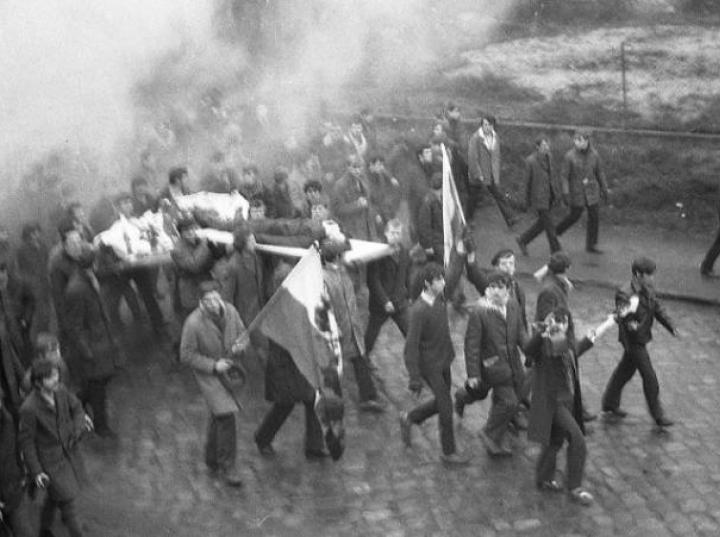 In the picture above, you can see similar examples of a blood-stained flag from anti-socialist protests in Gdynia in 1970. 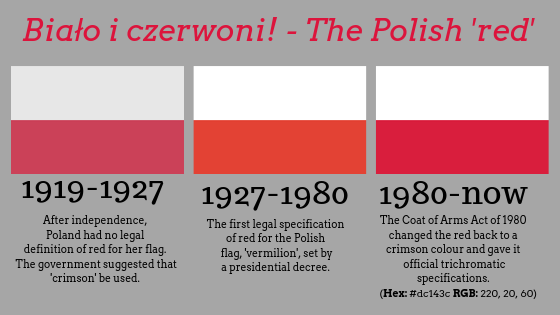 As you can see in the image above, the colour red has changed quite a lot throughout time.

You read earlier about cockades, the piece of ribbon tied to a soldier’s hat during battle. While Poland had a National Cockade act that defined when and where cockades were to be used, it didn’t specify the exact colour of red that had to be used.

The Coat of Arms act from this time also didn’t specify the exact shade of red that represented Poland.

In 1921, the government released a pamphlet that suggested that the colour ‘Crimson’ be used. This was not an official law but was made official by a presidential decree in 1955.

In 1980, a new version of the act changed the shade back to a more of a crimson shade and also gave it official tri-chromatic values as follows:

The simplicity of The Republic of Poland’s national flag means it’s quite simple for it to modify for specific governmental or military purposes.

Below you can see the flag for the Polish Land Forces and how it uses the same colour, red, like the flag.

Here’s is the Airforce Insignia of the Polish Airforce. It uses the same colours as the flag and was made famous by Polish Fighter Pilots during the Battle of Britain. 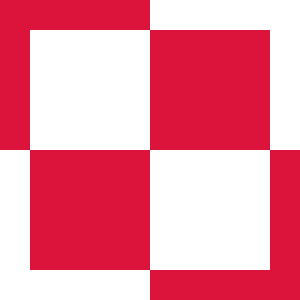 Many cities in Poland also use the simple two-stripe design. Below, you can see the official flag of Warsaw: 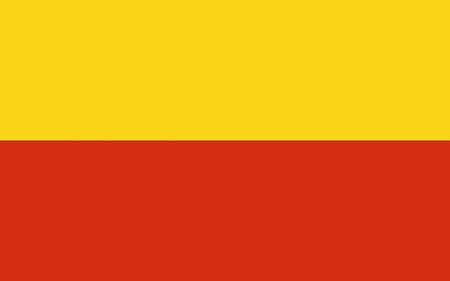 And the flag of Krakow:

The flag of Torun:

And the flag of Katowice:

So as you can see, the national flag sets the theme for the flags of many other cities!

Legal Usage Of The Flag Of Poland

Polish law says that the flag and other insignia must be treated ‘with reverence and respect. Public disrespect, destruction or intentional removal of the national flag is a crime and can be punished with a fine or up to a year behind bars.

Statistics from 2003 and 2004 show that there were a total of 139′ crimes’ involving the national flag in these two years.

The Coat of Arms Act says that everyone can use Poland’s flag as long as it’s done respectfully. Interestingly, the ability to use the national colours and fly the Polish flag outside of a holiday was only made legal in 2004. It’s worth noting, though, that before 2004, this law wasn’t enforced all that much.

Between 1955 and 1985, unauthorized use of any national symbol was an infraction. The monopoly that the communist party had on their version of the flag meant that using it was a bit of a ‘middle finger’ to authorities, a form of resistance.

That’s why the Solidarność logo uses the flag in a lot of its imagery. 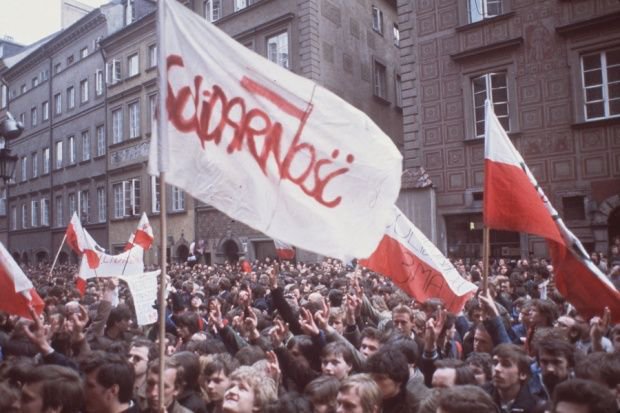 Many countries have similar white and red flags. Indonesia and Monaco, in fact, have the same flag as Poland, just inverted.

Recently, Polish and Indonesian Naval Officers met to conduct war exercises. The official meeting was great if you like symmetry. 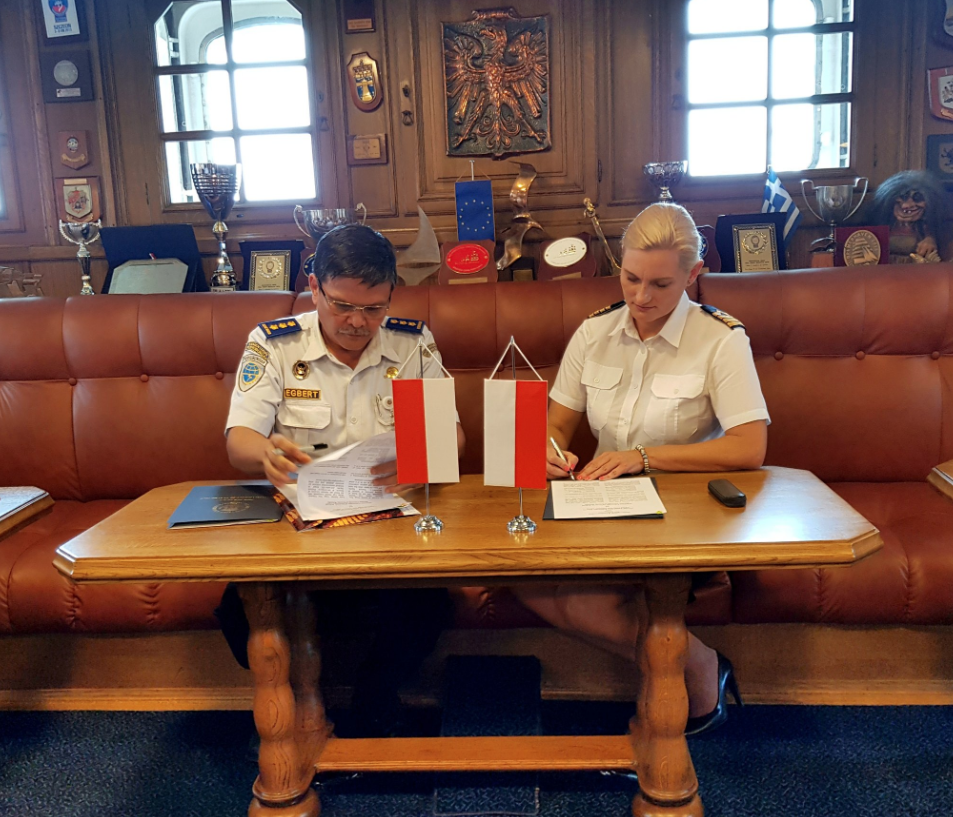 When you look at local and regional flags of other parts of the world, well, it is easy to see a few copycats: 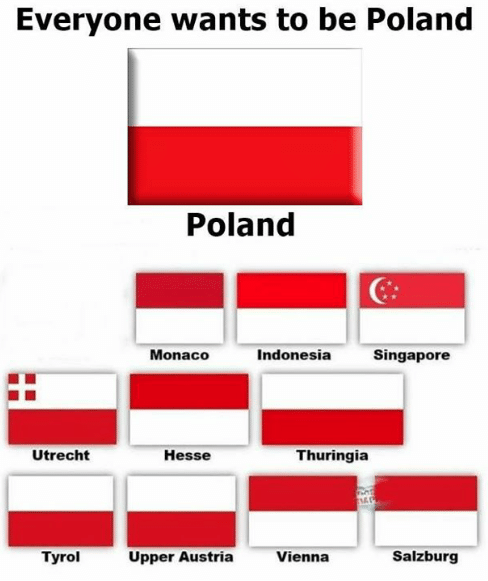 Poland’s flag means a lot to its people. It shows off its history, its pride and strikes a particular emotion into the heart of every Pole.

What other ways have you seen it used? What other parts of the world do you see it being flown? Let us know in the comments!