Why foreigners don’t feel safe in Poland on Independence Day 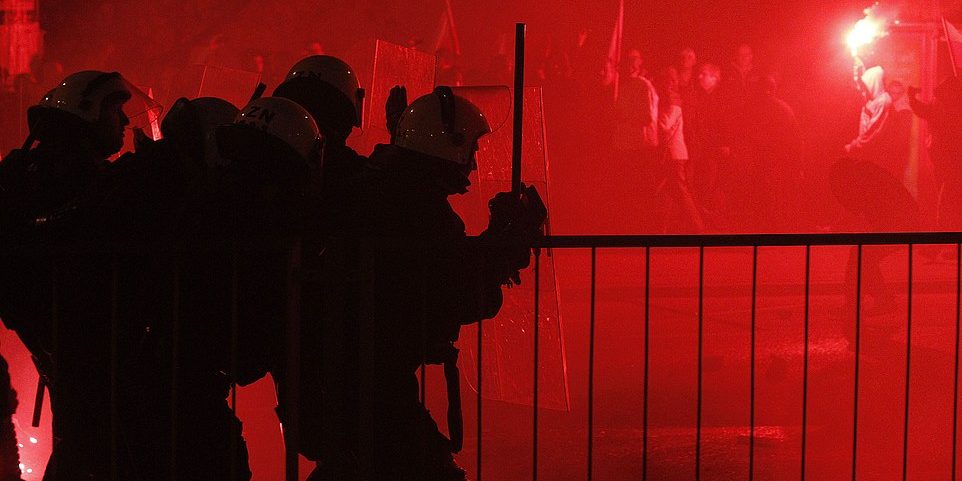 This blog is one I didn’t want to write, but one I feel must be written. It, unfortunately, focusses on a select few that misinterpret what today is about. It by no means reflects my personal opinion of this beautiful country I love or the people that make this land what it is.

I will instead focus on a minority. A minority that screws up Independence Day in Poland for everyone else.

Poland’s Independence Day celebrates the day the country regained its independence. In 1918, after 123 years of being shared amongst Austrian, Russian and Prussian rule, the Polish state was once it’s own.

But in recent years, ‘Independence day’ has become ‘destroy your own country day’.

I feel safe here. I feel just as safe here as I did in Australia. I live 50 meters away from a mosque and I feel safe every single day.

I feel unsafe when there are protesters and multiple police cars surrounding the mosque – as they are right now.

I feel unsafe and threatened on a bus with a few Legia Warszawa fans on game day.

Plac Zbawiciela, or ‘Saviour square’ in Warsaw was home to an art installation. Not some kind of weird, contemporary art, nothing abstract. It was a rainbow made of plastic flowers. 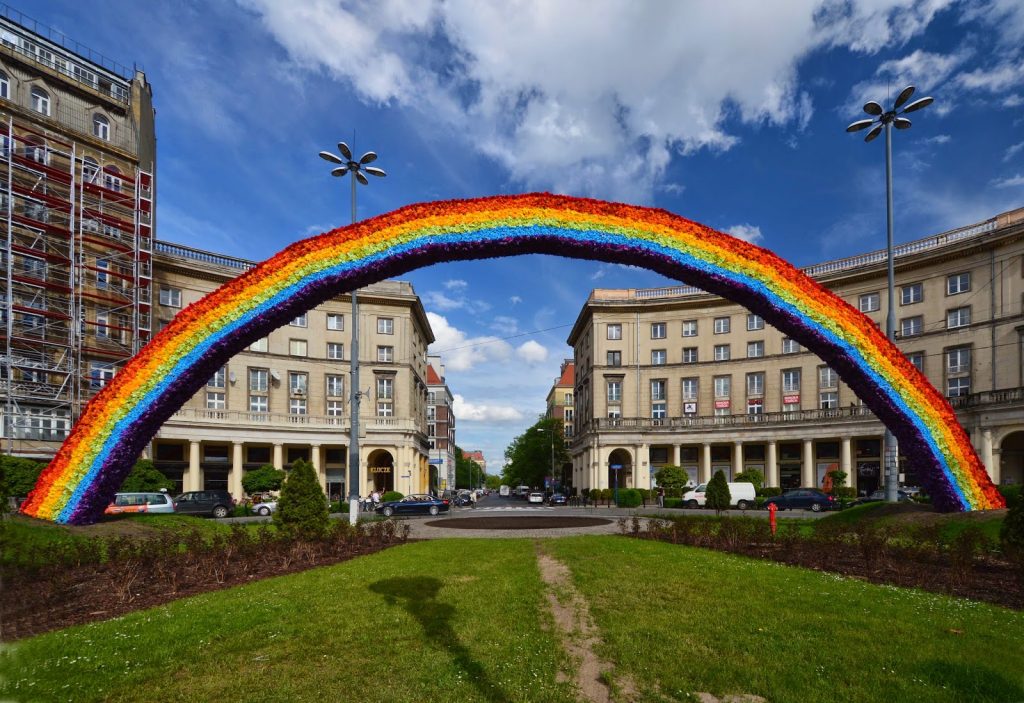 On November 11, 2013, a ‘patriotic’ group decided to burn this rainbow as it was seen as a symbol of gay rights and tolerance.

They felt threatened by a plastic flower rainbow. 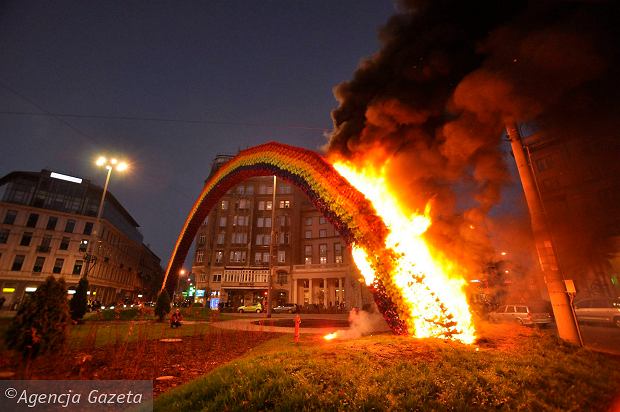 These thugs were so threatened by a rainbow, that they had to wear balaclavas to seal their identities while they vandalized government property.

Whilst it was burning, they chanted ‘God, Honour, and Fatherland’.

I’m not sure which God they were referencing, but my understanding is that most Gods practice tolerance, compassion and understanding. This happens in many Polish cities.

During the 15th century, Poland defended Europe and protected Christianity from Eastern and Oriental influence.

Perhaps these patriots feel that a rainbow presents the same threat to the almighty Catholic church as Ghengis Kahn did.

If a rainbow made of flowers gets this response, let that set the tone for how a foreigner gets treated on a day like today.

I am a foreigner. I was not born here.

I want to speak Polish, I want to know, understand and celebrate Polish history, culture and the way of life.

I want to be here. I want to integrate. I believe that most foreigners in Poland want that, too.

On this country’s day of Independence, I want to go the middle of the nation’s capital and celebrate the day.

Because I don’t speak Polish.

I am terrified that by saying ‘mówię trochę po polsku’ (I speak a little Polish), I will be met with hostility. It may be the polar opposite, but if recent events are anything to go by, foreigners are not safe in Warsaw today.

I sadly have to admit, that I am lucky that I’m white. I have numerous Latino and Asian friends here in Warsaw that cannot go into the city center at all today.

I cannot comprehend the amount of aggression that the Middle Eastern communities of Warsaw would be experiencing today. 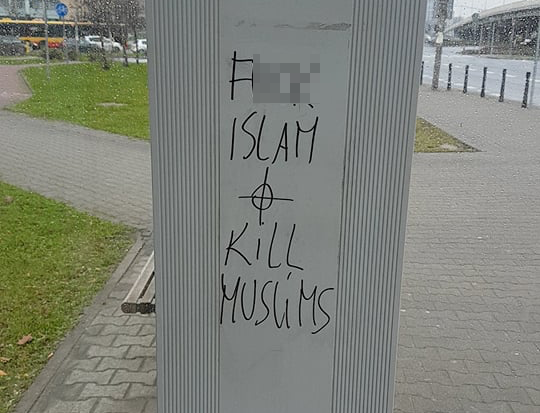 ‘I’ll use a foreign language to tell these ‘foreigners’ that they’re not welcome in my country, where we speak our own language’.

So why can’t I celebrate today in the city center?

Because the middle of Warsaw today will be flooded with flare-waving goons who think the best way to celebrate independence is to drag their county’s name through the mud.

Rest assured, that the world will be watching Warsaw and Poland in general today. In recent years, demonstrators have drawn worldwide attention to themselves for their violent clashes with police.

‘Demonstrations’ where people simply amass in the middle of the road, light flares and then throw rocks at police when they’re asked to disperse.

‘I love and respect my country so much that I’m going to assault a police officer!’

Far-right, or ‘patriot’ groups feel that today is the best day of the year to beat their chest. Yes, every country has nationalists, (my personal favorite is the Australian Nazi Party), and their lack of logic has always astounded me.

Living here, I am exposed to Polish nationalists more than any others – yet I cannot get past their lack of raw, simple logic.

Many of these groups claim that they need to stand up for Poland, that Poland and her way of life is under attack. That multiculturalism is not good.

If that’s the case, perhaps Poles should go back to driving only Syrenka’s and eating only Prince Polo. Because, you know, nothing good comes from another country.

But what does one have to do to not be subjected to violence today?

Is it to speak Polish? Immigrants, especially the Vietnamese in Warsaw, speak fluently.

Is it to be Catholic? There are Catholic Arabs living in the region today.

Is it to be Slavic? Poland itself has only 57% Slavic DNA.

It is fashionable for young people to wear patriotic shirts, with the symbol of anti-Nazi resistance or with the Polish eagle.

More and more young people are interested in “paramilitary” gun clubs, where they learn to handle firearms and shoot.

Is this Poland’s definition of masculinity? One must be able to handle a gun or be skilled in urban warfare for when the foreign invasion comes?

Is physically assaulting foreigners and even other Poles a rite of passage to becoming a man?

‘I love my country so much that I’m going to assault others and damage someone’s property’.

Shop fronts, cars, and other private property were destroyed by these ‘demonstrations’ in recent years. And I cannot help but feel it will repeat this year and get progressively worse.

In my 18 months of living and working here, I’ve met a lot of Poles. A lot of educated people from various socio-economic groups that have traveled and seen the world. Most of these people have told me that these ‘protesters’ people make them ashamed to be Polish.

Ashamed to be Polish.

Many of my Polish friends say they consider themselves more ‘European’ than Polish.

These Poles feel unsafe to go into the capital – of their own country – on the day of its independence.

All because a group of thugs doesn’t like people that weren’t born here.

To these aggressive thugs, I ask you this.

Why do you feel threatened?

Is Russia taking over?

Too many Ukrainians? Vietnamese? Indians? Too many Australians? Or are we a ‘cool’ country? Australians are ok because we’re white and have nice beaches.

Today is not a day where I have to lock the door and not leave the apartment- not at all. I can take the dog for a walk, I can go for a ride on my bike – for all intents and purposes, it is just like any other day.

But it’s unsafe for me to go into the city center.

If Poland is a free country, why is it so unsafe for foreigners – even Poles – to go into the city center?

I know that I am not alone in these opinions. Many other expats have used Facebook groups to check if today is safe.

But one of these questions was asked by a dark-skinned Muslim.

But he has been warned not to. For his own safety, in the country he wants to live in, he cannot be free today.

And that is the level of democratic, religious and cultural freedom on November 11th in Poland.

But the sheer fact that expats living in Warsaw have to ask if today is safe, is utterly disappointing.

Polish independence day has become like gang warfare. Clannish and fractured. Some poles want nothing to do with today. Others want to be violent for no reason. Others want to peacefully reflect on their country’s achievements.

I can only hope that in the future, there is a way for foreigners to express and celebrate their happiness and gratitude for the independence of the country they live in – Poland.